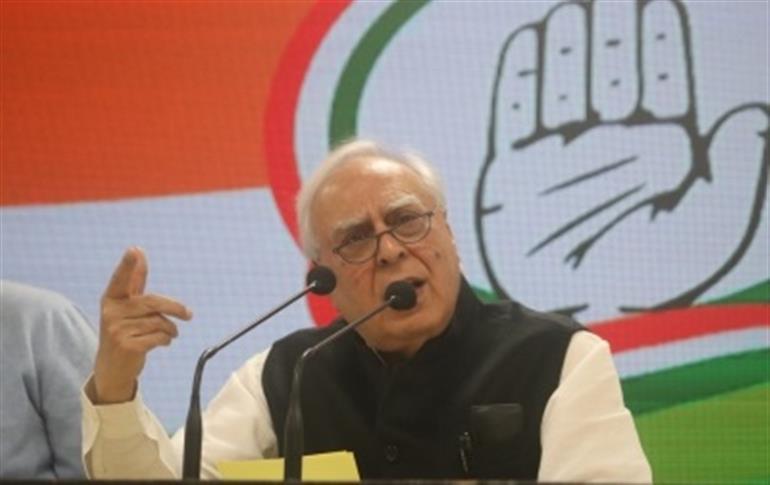 NEW DELHI: Upping the ante against the Modi government over the Pegasus phone tapping issue, senior Congress leader Kapil Sibal on Tuesday said that the alleged snooping on the phones of Chief Ministers, politicians, judges and people violates multiple laws of the country and is a threat to national security.

He also described the spying on phones of the ministers as “illegal”. After the news broke that leaders of the Karnataka Congress and Janata Dal-Secular could have been snooped upon in 2019, when the state’s alliance government collapsed, Sibal addressed a press conference at his residence.

He said that if this data reaches other nations, if it is accessed by NSO technologists, then it becomes a “threat” to national security. “For now, only these lists have come. It is possible that in the coming days, it will be revealed that they have intercepted other people too,” he said.

Sibal, a senior lawyer, asserted that such snooping is “illegal” at multiple levels. “It can violate multiple cyber laws, the Official Secrets Act, the fundamental right to privacy, and depending on the situation, can even be counted as stalking,” the Congress leader said.

Taking on the government, Sibal demanded that the Supreme Court should investigate this and a White Paper should be presented in the Parliament. He said that ministers do not want to tell the reality to MPs and people of the country.

“Union Home Minister (Amit Shah) should say that they have not used this (Pegasus) but he neither admitted nor rejected it. The question arises – who used it if the government and its agencies did not?” he said.

“The Supreme Court should investigate this and the proceedings should be held in-camera. A white paper should be presented in the Parliament and the minister should tell clearly whether the government or any other agency used Pegasus here or not,” he demanded.

The issue triggered a stormy start to the Monsoon Session after a global collaborative investigative project revealed that Israeli company NSO Group’s Pegasus spyware was used to target over 300 mobile phone numbers in India including that of two ministers in the Modi government, three opposition leaders, constitutional authorities, several journalists and business persons.

It snowballed on Tuesday after it came to fore that in July 2019, phone numbers of Karnataka’s then Deputy Chief Minister G. Parameshwara and the personal secretaries of then Chief Minister H.D. Kumaraswamy and former Chief Minister Siddaramaiah, were selected as possible targets for surveillance. The Congress on Monday accused the government of “treason” and held Shah responsible for the snooping and hacking of phones of journalists, judges and politicians, and demanded a probe.

BJP leader and former IT minister Ravi Shankar Prasad questioned the credentials of those behind the story as well as its timing, coming a day before Parliament’s Monsoon Session that began on Monday, as he accused the Congress of hitting a “new low” in making baseless allegations.

Border issue: Assam advises its people not to travel to Mizoram