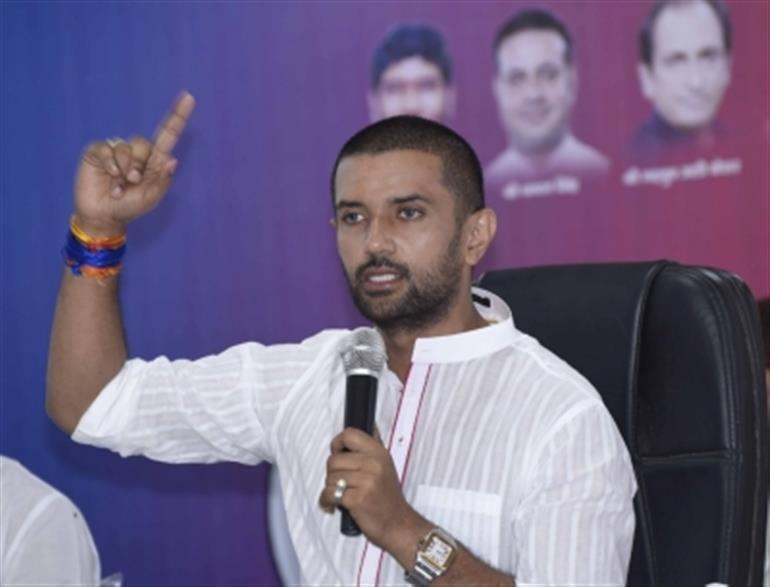 NEW DELHI: Hours after Chirag Paswan, son of late Union Minister and party founder Ram Vilas Paswan, was removed as LJP President in an emergency meeting on Tuesday by the five rebel MPs, he held a parallel executive committee meeting virtually where it was decided to expel the five MPs for anti-party activities.

Earlier in the day, Chirag Paswan was removed from the post of LJP President in an emergency meeting, party sources said.

The principle of “One Man, One Post” was invoked by the rebels, led by his uncle Pashupati Kumar Paras, to remove him from the post, the sources said.

The removal of Chirag Paswan from the top party post came a day after five of six party MPs — Paras, Chandan Singh, Chaudhury Mehboob Ali Kaiser, Beena Devi, and Prince Raj — undertook a coup and removed him as the LJP leader in the Lok Sabha.

Sources said that Suraj Bhan will function as working President until a new President is elected in a national executive meeting, which is expected soon in the coming days.

“The National Oresident of LJP Chirag Paswan is authorised to take all decisions in the coming assembly elections on behalf of the party,”it said.

Earlier in the day, Chirag Paswan likened the party to a mother who should not be “betrayed”.

In an emotional tweet in Hindi, he said, “I made efforts to keep the party founded by my father Ram Vilas Paswan and my family together but failed. People are above all else in a democracy. I thank those who had faith in the party.”

Paswan also shared a six page letter he had written to Paras, the youngest brother of his father, on March 29 in which he had highlighted his uncle’s unhappiness over a number of issues, including his elevation as the party President.

He also discussed how Paras did not attend the party functions despite being invited and was not available for any suggestions.

The LJP was founded by Chirag Paswan’s father Ram Vilas Paswan, who passed away in October last year.

Chirag Paswan had taken over the reins of the party after the demise of his father ahead of the Bihar Assembly elections last year.

Chirag Paswan had decided to contest the Bihar elections outside the NDA and had led an aggressive campaign, questioning Nitish Kumar’s governance model in the state. His decision saw the ruling Janata Dal-United in Bihar receiving a massive blow as it lost on several seats due to the triangular contests.