He tweeted, “If you cannot stand up for her at least leave Shilpa Shetty alone and let the law decide? Allow her some dignity and privacy. It is unfortunate that people in public life ultimately are left to fend for themselves and are proclaimed guilty even before justice is meted out.”

In another tweet, Hansal Mehta stated, “This silence is a pattern. In good times everybody parties together. In bad times there is deafening silence. There is isolation. No matter what the ultimate truth the damage is already done.”

“This vilification is a pattern. If the allegations are against a film person there is a rush to invade privacy, to pass sweeping judgement, to character-assassinate, to fill ‘news’ with trashy gossip – all at the cost of individuals and their dignity. This is the cost of silence,” he added. 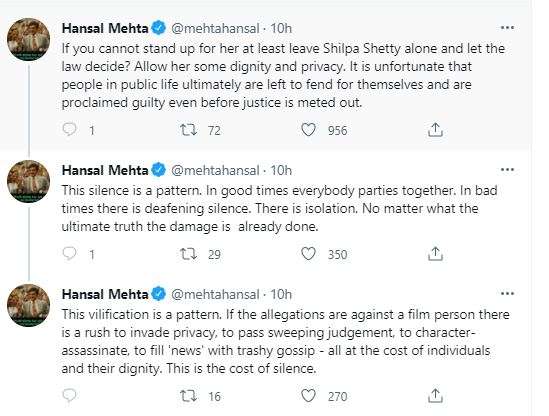 Meanwhile, the police claimed that during the probe into the case, it was found Kundra set up Armsprime Media Pvt Ltd, which, through London-based Kenrin Pvt Ltd, bought Hotshots app to upload objectional videos on social media.

The Mumbai crime branch has also appointed forensic auditors to look into the financial transactions and bank accounts of businessman Raj Kundra, arrested in an adult films case, a police official said on Tuesday. Also, no clean chit has been given yet to Kundra’s wife, Bollywood actor Shilpa Shetty, in the case.

They had also alleged that Kundra earned over Rs 1.17 crore between August and December last year by uploading pornographic content online, through Hotshots. The police also claimed to have found 51 obscene videos- 35 with Hotshots logo and 16 with BollyFame logo, during searches at the office of the accused.