In one of the photographs, we can see Pavail sharing smiles with Big B. And according to Pavail’s caption, it seems Big B turned DJ at the bash.

“Schedule wrap! What a beautiful night with DJ @amitabhbachchan in the house,” he wrote. Also, Big B’s look from the film has also been leaked. In the viral picture, Amitabh Bachchan is seen wearing a pink shirt paired with a dark green-coloured half-jacket. Rashmika is also seen standing next to the megastar.

Recently, a picture of Bachchan and Mandanna from the sets of the film has surfaced on social media and the leaked photo is going viral on the Internet. In the picture, the two actors can be seen looking at something on a phone. Take a look: 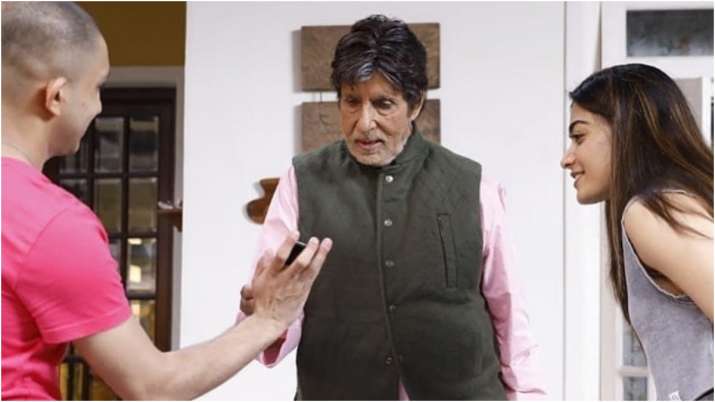 It will be Rashmika’s second Bollywood film, her Hindi debut being Mission Majnu with Sidharth Malhotra. Talking about working with big B, she said, “Initially when I read the script, it was just about the script because nobody told me anything about who was going to be cast beside me! I liked the script and later I was told that, Bachchan sir would be in the film and I was like, ‘wait, come again. what?!’ It sounded too good to be true and I thought someone was playing a prank.”

‘Goodbye’ is a Good Co. production, and is produced by Balaji Telefilms and Reliance Entertainment. Meanwhile, on the work front, Amitabh Bachchan has plenty of projects in his kitty including ‘Chehre’, ‘Jhund’, ‘Brahmastra,’ ‘Mayday’ and a remake of the Hollywood film “The Intern” coming up, besides an untitled film with Prabhas and Deepika Padukone.

Tisca Chopra’s first look from ‘Fear 1.0’ will keep you hooked for more