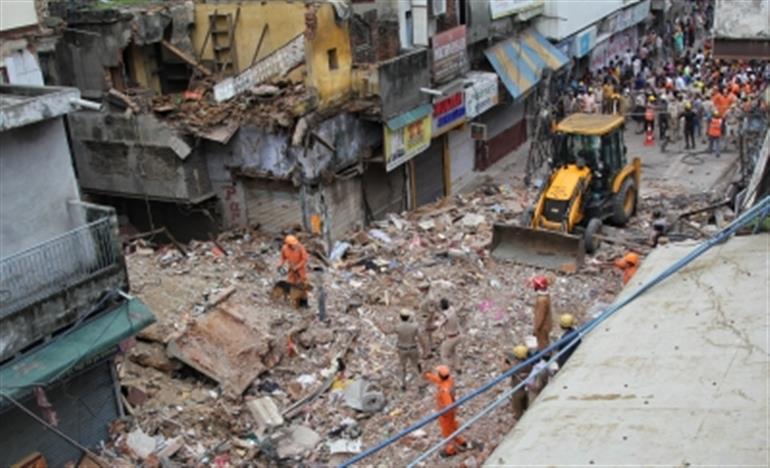 NEW DELHI: The four-storey building that collapsed on Monday, killing two children in North Delhi, was around 50 to 60 years old and was not declared dangerous, while nine other buildings of similar vintage in the same street were categorised as dangerous.

A senior official in North Delhi Municipal Corporation (North MCD) said that there are 20 such buildings in the area, i.e., ward number 13, Ghanta Ghar Sabzi Mandi, which are over 60-70 years old and have been identified as dangerous buildings.

“Out of these 20 buildings declared as dangerous, nine are located in the same street where this was located,” the official said.

However, this particular building was not earmarked as dangerous.

“The building that collapsed on Monday was not identified as dangerous as it was apparently not found in a dangerous condition during the survey,” the official said.

“The upper floors of the building were vacant, and no construction activity was going-on. No complaint regarding any unauthorised construction in this particular building was received,” official added.

The official further stated that the civic authority has conducted a survey for detection of dangerous buildings in all six zones before the onset of monsoon season.

During the survey, around 700 properties under the North MCD were found in dangerous condition, while 444 buildings were identified for carrying out necessary repairs.

“To prevent occurrence of any such incidence in future, a thorough survey of the areas will be conducted again in the next 48 hours especially, of the buildings, which have been already identified as dangerous,” North MCD said in an official statement.

“Those buildings which are found at imminent risk after the survey, will be vacated as per law.”

Meanwhile, the North MCD has directed all the zonal authorities to depute zonal engineers for re-assessment of the conditions of already declared dangerous buildings and to take immediate action.

On the other hand, Delhi police have filed an FIR under section 304 of IPC in the building collapse incident and an investigation is underway, said a senior police official.