Filmmaker Anurag Kashyap underwent angioplasty surgery earlier this week. The “Gangs of Wasseypur” director, is now back home and recovering. Anurag’s daughter Aaliyah shared the first glimpse of the director. She shared a short video of her father on her Instagram stories.

In the video, Anurag looks bald and has bushy eyebrows. He can be seen wearing a blue T-shirt, with black mask hanging around his neck. He stares at the camera as it zooms in on his face and then says, “I am so blind.” The sound of girls laughing can be heard in the background. The video is likely to be captured via some Snapchat/Instagram filter. 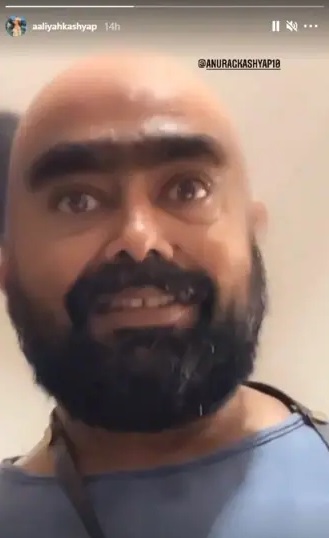 Anurag Kashyap had the cardiac procedure after he complained of chest pain last week, infomed a source close to him told PTI. “Yes, he underwent an angioplasty. He is now recuperating. Thank you for your concern,” his representative said in a brief statement. The 48-year-old director had been advised rest for a couple of weeks, he added.

Anurag Kashyap is best known for directing critical hits like “Black Friday”, “Raman Raghav 2.0” and the Netflix show “Sacred Games”. He has recently wrapped up his upcoming new age thriller movie “Dobaaraa”, featuring his “Manmarziyaan” star Taapsee Pannu and Pavail Gulati. The film is in post-production.

Anurag Kashyap was last seen in ‘AK vs AK’, which was directed by Vikramaditya Motwane. The film also starred Anil Kapoor. His last release as a director was the Netflix film ‘Choked’ (2020), starring Saiyami Kher and Roshan Mathew.

Sunil Grover shares how he makes comedy seem so easy

Anupam Kher pens heartwarming birthday wish for wife Kirron: People love you for the person you are