Post Bigg Boss 14 Aly Goni has become a heartthrob of Indian television. He enjoys a massive fanbase on his social media. Recently, Aly interacted with his fans through the Ask Me Anything session on his Instagram. Fans bombarded him with some interesting and fun questions. Aly too had epic replies for them. One of Aly’s die-hard fans proposed to him for marriage. And Aly had a cheeky reply for this. He posted Jasmin Bhasin’s picture along with the caption, “Isse permission leni padegi. Loge,” followed with a devil icon. 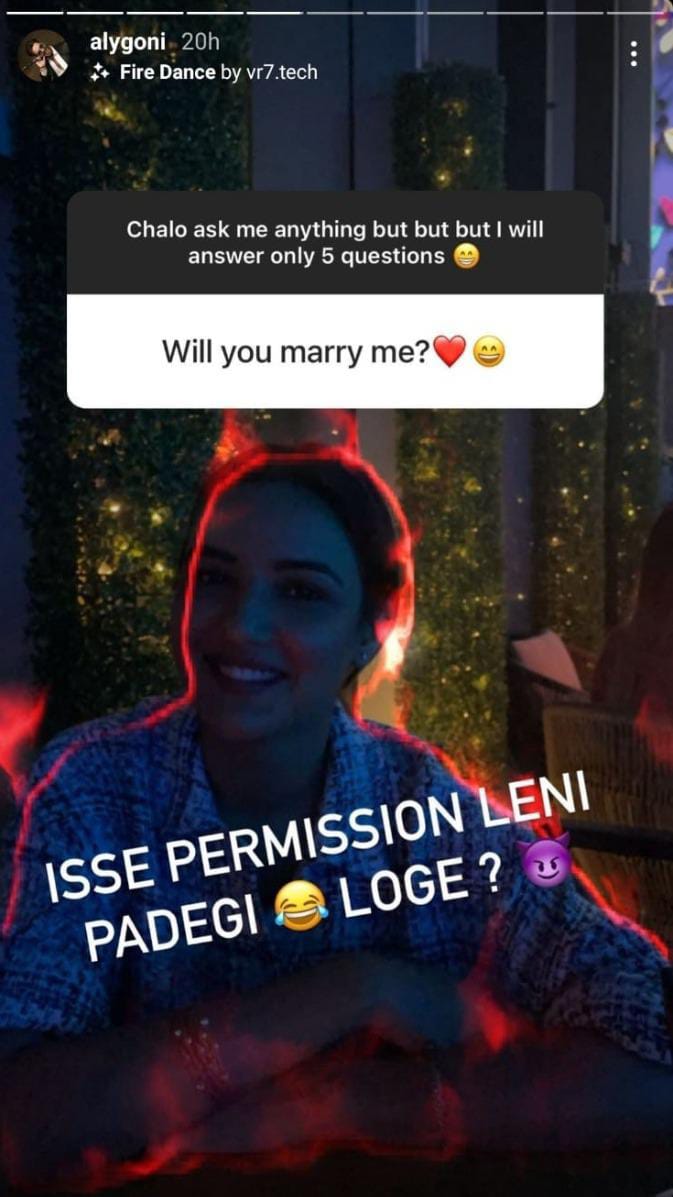 Jasmin and Aly became friends while shooting the stunt-based reality show Khatron Ke Khiladi. Their love blosommed inside the Bigg Boss house and the couple confessed theri feelings for each other. An the two are now officially dating each other and are in a relationship. The lovebirds are often snapped together in the city. They also don’t shy away from posting some love filled pictures on their social media platforms.

Both Jasmin and Aly’s fans lovingly call them ‘Jasly’ and they are eagerly waiting for the couple to tie the knot. Recently, Jasmin was spotted outside a salon and she was bombarded with questions about her wedding plans to Aly. Laughing them off, the actress said, “Possible hi nahi hai. Abhi toh humari koi baat nahi chal rahi. Abhi toh naya naya pyar hua hai (It is not possible. We are not talking about anything right now. This love is very new right now).”

Aly too had a similar reaction when he was asked if he’s planning to get married to Jasmin anytime soon. Watch the couple’s reaction here:

On the professional front, both Aly and Jasmin were seen together in a  music video, ‘Tera Suit’. This was couples first music video together and it garnered a lot of love and praises.

Gauahar Khan: Finally getting time to feel like a newly-wedded bride