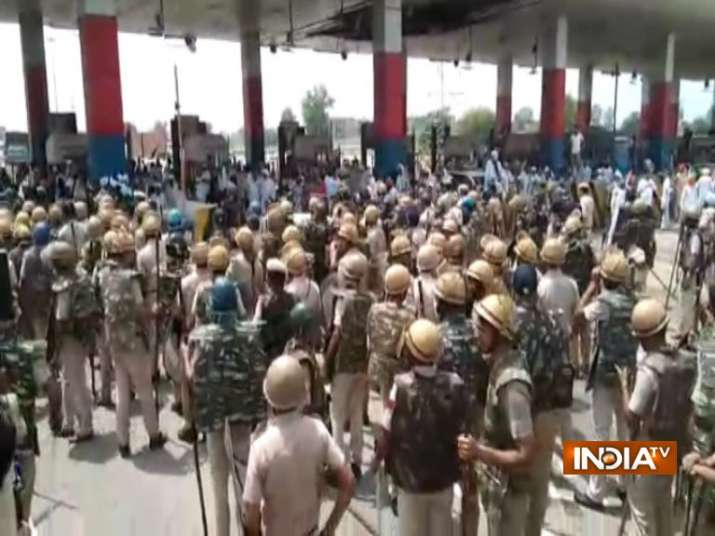 The Haryana Police lathicharged a group of farmers disrupting traffic movement on a highway while heading towards Karnal to protest against a BJP meeting on Saturday. Haryana Chief Minister Manohar Lal Khattar, state BJP president Om Prakash Dhankar and other senior leaders of the party were present at the meeting.

Following the police action, tension gripped the region, especially near Bastara toll plaza, where the clash took place. The state police drew severe criticism for the action against the farmers, and several roads were blockaded at different places in protest.

Bharatiya Kisan Union leader Rakesh Tikait announced that all roads will be blocked till 5 pm in the state, in protest against the police action, which resulted in injuries to farmers.

“To protest the baton-charge in Haryana’s Karnal, all the roads will be blocked till 5 pm in the state,” Tikait said.

In a tweet, Commissionerate of Panchkula said that the Surajpur Toll Plaza (Kalka-Zirakpur Highway) has been blocked by protesting farmers.

Haryana Chief Minister Manohar Lal Khattar said farmers should have protested peacefully, adding that the police will take steps to maintain law and order if highways are jammed and stones are thrown at the forces.

“Obstructing official work is against democracy. If they wanted to protest, they should have done it peacefully. If they jam highways and throw stones at police, then police will also take steps to maintain law and order. We’ll look into it and take necessary action,” Khattar told reporters.

Haryana Bhartiya Kisan Union (Chaduni) chief Gurnam Singh Chaduni alleged that the police brutally lathicharged the protesting farmers, leaving many injured. The police, however, said only mild force was used as the protesters were blocking the highway, affecting traffic movement. The police said the protesters were bent on moving towards the venue of the BJP meeting in Karnal. All roads leading to the venue had been heavily barricaded.

READ MORE: SC asks Centre to find a solution to blockade of roads in Delhi, Noida due to farmers’ protest