Shah Rukh Khan’s son Aryan Khan makes a comeback on Instagram, gives a shout out to sister Suhana Khan for ‘The Archies’

Mumbai: After a long hiatus, superstar Shah Rukh Khan and Gauri Khan’s son Aryan Khan made a comeback on Instagram almost four months after his arrest in a drug seizure case. The star kid took to the photo-sharing application to wish her sister Suhana Khan on her acting debut with Zoya Akhtar’s directorial venture ‘The […]
By waseem Sun, 15 May 2022 Mumbai: After a long hiatus, superstar Shah Rukh Khan and Gauri Khan’s son Aryan Khan made a comeback on Instagram almost four months after his arrest in a drug seizure case. The star kid took to the photo-sharing application to wish her sister Suhana Khan on her acting debut with Zoya Akhtar’s directorial venture ‘The Archies’. On Sunday, Netflix and filmmaker Zoya Akhtar announced the cast of the film ‘The Archies’ and shared the first look.

Sharing a teaser video of the film, Aryan wrote, “Good luck sister! Go kick some a**.” He also shared a poster of the film and wrote, ‘The teaser looks amazing everyone looks great. You all will kill it.’ 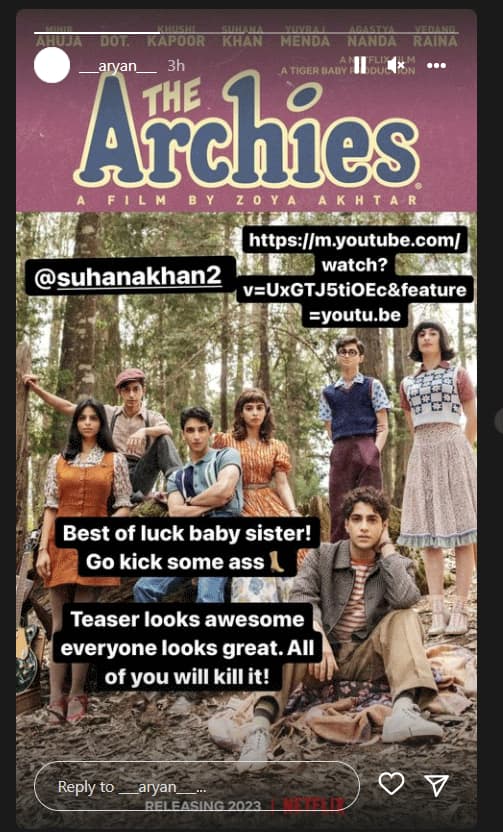 This is Aryan’s first post on Instagram since his arrest in a drugs case last year. The star kid has been maintaining a low profile for the past few months. Her latest post on Instagram shows that she is quite excited for her younger sister who is all set to make her mark in the acting world.

For those unaware, Aryan was arrested on October 2 last year following a Narcotics Control Bureau (NCB) raid in Mumbai. The Bombay High Court granted him bail 25 days after his arrest.

Earlier in the day, Shah Rukh Khan also penned a lovely note for his daughter. He wrote, “From renting 25 paisa a day to Archies Digest from bookstores to bringing @zoieakhtar to life on screen….Incredible. Good luck to all the little ones as they take their first small steps in the most beautiful professions. King Khan also shared a golden piece of advice for his princess and wrote, “And remember @suhanakhan2 you are never going to be perfect…. But being yourself is closest to him. Be kind and give as an actor… brick-stone and applause is not yours….the part of you that gets left behind on screen will always be yours….you have come a long way….but street people My heart is endless…..go ahead and smile as much as you can. Now let’s light… Camera and Action!

Gauri Khan also gave a shout out to her darling daughter for her debut film ‘The Archies’. He took to his Instagram account to congratulate his daughter Suhana Khan and the team of TheArchies, writing, “Congratulations…Wishing you all the wonderful kids and the team of #TheArchies. And who better than @zoieakhtar to guide them through this journey!! You did it @suhanakhan2!!!!!!! (heart emoji) done.” Reacting to Gauri’s post, Suhana wrote, ‘I love you.

It will be produced by Tiger Baby and Graphic India. According to a release from the makers, “The film has the iconic gang of ‘The Archies’ at the heart of the film, and it perfectly matches the youthful energy, hope and enthusiasm of the sixties.”