When ‘Taarak Mehta Ka Ooltah Chashmah’ actress Munmun Dutta shared her MeToo experience, said ‘he had his hands in my pants’

NEW DELHI: ‘Taarak Mehta Ka Ooltah Chashmah’ is one of the longest running Indian sit-coms. Its first episode was aired on July 28, 2008 and since then, the show has acquired its own loyal viewers and has been receicing love and appreciation from all over. Apart from its fab TRP ratings, the show actors Dilip Joshi, Amit Bhatt, Disha Vakani and others are also immesely popoular among the audience and have become household names.

Actress Munmun Dutta, who is known for portraying the character of Babita Iyer in ‘Taarak Mehta Ka Ooltah Chashmah’, also is a popular figure now. The actress has always left her fans mesmerized with her beauty and fashion sense. However, there was this one time when she had opened up about her #MeToo experience and left her fans in a state of shock.

It was back in 2017 when the #MeToo wave had hit India and specially the film industry. The event saw many actors and starlets opening up about their ill experiences. From unwanted attention to sexual innuendos on the sets, several celebrities took to social media and shared their experience of what all they faced but couldn’t speak up back then due to social stigma attached to it or lack of enough support from their co-stars.

Taking to Instagram, the ‘Taarak Mehta Ka Ooltah Chashmah’ actress, Munmun had shared her sorrow a black background with #MeToo written in bold over it. She shared a lengthy post alongside the monochromatic photo that revealed she’s been a victim of the crime on several occasions.

Munmun Dutta wrote, “#MeToo …… Yes …. #Metoo ….. Sharing a post like this and joining the global awareness on sexual assaults on women all over the world and showing solidarity to each and every woman who sailed on the same boat , shows the magnitude of the problem. M surprised that some ‘good ‘ men are shocked to see the number of women who have come out and shared their #metoo experiences. NO DON’T BE. This is happening in your own backyard, in your own house, with your own sister, daughter , mother, wife or even your maid … Gain their trusts and ask them. You will be surprised at their answers.. You will be surprised with their stories..” 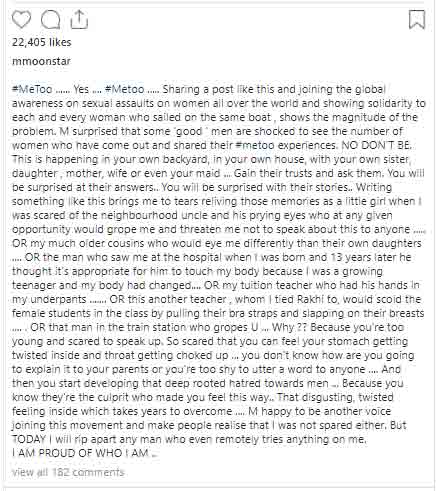 She continued, “Writing something like this brings me to tears reliving those memories as a little girl when I was scared of the neighbourhood uncle and his prying eyes who at any given opportunity would grope me and threaten me not to speak about this to anyone ….. OR my much older cousins who would eye me differently than their own daughters …. OR the man who saw me at the hospital when I was born and 13 years later he thought it’s appropriate for him to touch my body because I was a growing teenager and my body had changed…. OR my tuition teacher who had his hands in my underpants ……. OR this another teacher , whom I tied Rakhi to, would scold the female students in the class by pulling their bra straps and slapping on their breasts ….”