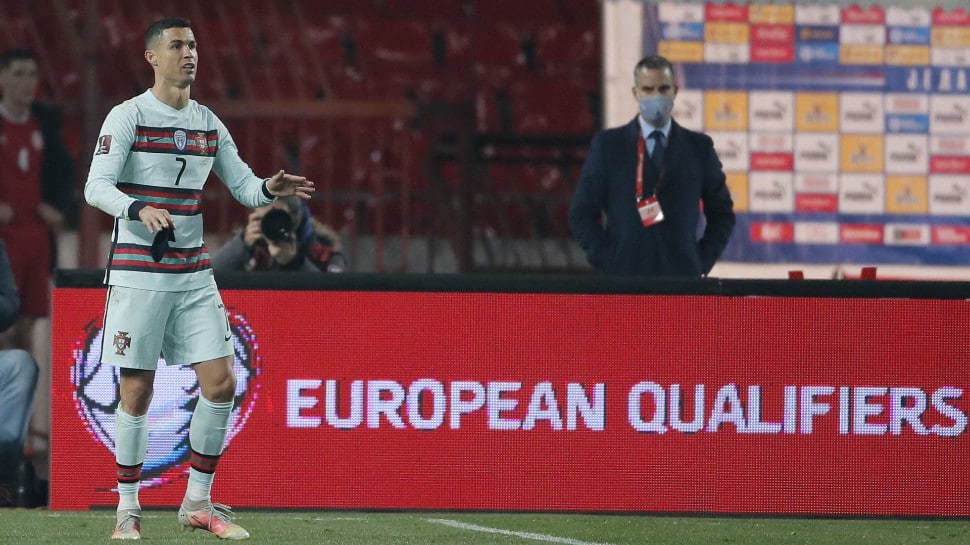 Star footballer and Portugal’s skipper Cristiano Ronaldo on Sunday (March 28) threw his captain’s armband on the ground and stormed off the pitch before the final whistle after he was denied a goal in the final moments of the game against Serbia.

During the World Cup qualifier on Sunday, Diogo Jota scored twice in the first half, putting Portugal 2-0 ahead in the game. However, in the second half, Serbia managed to level the scores with the help of goals from Aleksandar Mitrovic and Filip Kostic.

Ronaldo remonstrated with the linesman before he was shown a yellow card. Juventus star then walked off the pitch and threw his captain’s armband on the floor.

‘Entire nation is being harmed’

Ronaldo opened up on the incident and said that there are difficult times when “we feel that an entire nation is being harmed.”

After the incident, Juventus striker put an Instagram post and insisted that captaining Portugal is “one of the greatest pride and privileges of my life.”

“Being captain of the Portugal team is one of the greatest pride and privileges of my life. I always give and will give everything for my country, that will never change. But there are difficult times to deal with, especially when we feel that an entire nation is being harmed. Lift your head and face the next challenge now! Come on, Portugal,” Ronaldo wrote.

With Ronaldo’s goal being ignored, the match between Portugal and Serbia ended in a 2-2 draw.