07:26 AM: And Deepika finishes ninth at the end of the final round at 663. Four archers also set the tone of stiff competition as they surpass Olympic records of 673 with South Korea’s An San setting the new record at 680. Stay tuned for the complete result.

07:20 AM: It’s worth pointing out that if Deepika, who has shot 12 Xs so far, finishes tied on points with Roman, who shot 9 Xs, then Deepika will grab the sixth spot for the elimination rounds.

07:17 AM: Deepika shoots a disappointing 53 in the penultimate round and slips to 7th. Mexico’s Aida Roman overtakes her with a point lead.

07:10 AM: Deepika is making a familiar late surge with two X’s and two 10’s to earn 58 out of possible 60 to reach a total of 556. She is now three points away from fourth-placed Alejandra Valencia of Mexico while An San remains at top with 568.

07:04 AM: Deepika shoots further 56 to climb to seventh at 498 while An San at the top shoots the same as Olympic record of 673 seems a possibility.

07:00 AM: Breakdown of Deepika performance after eight round (48 arrows) 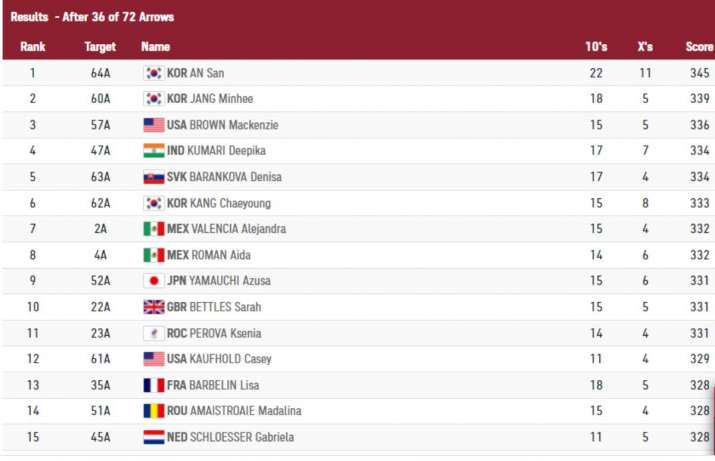 06:30 AM: A breakdown of Deepika’s performance at the end of the first half

06:27 AM: Deepika is getting better by the minute as the World No.1 climbs to the fourth spot at the end of the first half.

06:06 AM: A breakdown of Deepika Kumari performance after shooting 18 arrows

05:54 AM:  After the second set of arrows, Deepika shoots further 55 to and is five points behind leader An San of Korea at ranked 10.

05:49 AM: After the first six arrows, Deepika is eighth with 56. She started off with an X and backed that up with three 10s but shot an 8 with the sixth arrow. Early days. Ukraine’s Veronika Marchenko is in the lead with 58 (five 10s, two of which were Xs).

Unfortunately, the Archery Ranking Rounds are not broadcast LIVE.

The Indian archery quartet of Deepika Kumari, Atanu Das, Tarundeep Rai and Pravin Jadhav will begin their campaign on the first day of the Tokyo Olympics on Friday.

Deepika will be hoping to be third-time lucky in Tokyo. This Olympics is Deepika’s third Games. She had finished eighth in the women’s team event in the 2012 London Olympics and crashed out in the first round in the women’s individual section in Rio de Janeiro five years ago.

SL vs IND | Difficult situation for us but we decided to stay on and play series: Shikhar Dhawan