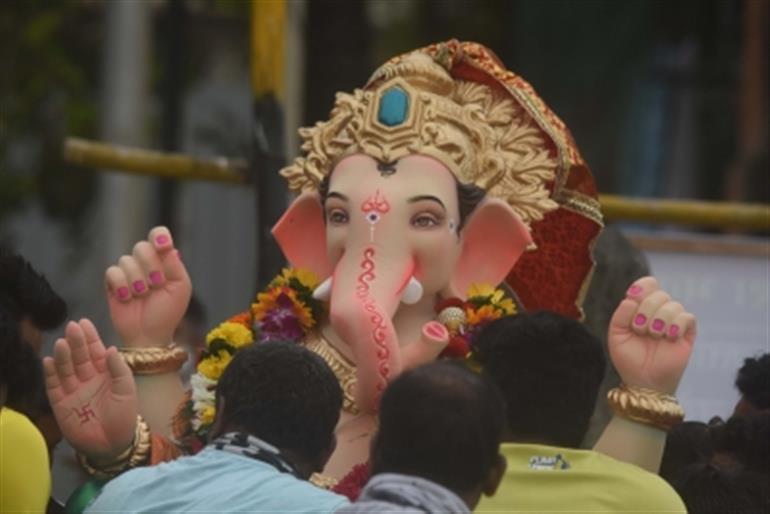 CHENNAI: The Hindu Munnani will conduct a hunger protest on Monday at Valluvar Kottam against the DMK government’s ban on installing idols at the roadside during the Vinayaka Chaturthi celebrations.

The BJP and the Hindu Munnani are up in arms after the DMK government announced that idols would not be permitted to be installed at roadsides and that immersion of these idols in water bodies was not allowed. The government in its order on August 30 said that this was to adhere to the Covid standard protocol and prevent the spread of the pandemic.

This has not gone down well with the Hindu outfits, and the BJP Tamil Nadu state president, K. Annamalai questioned the wisdom of the government banning Vinayaka Chaturthi celebrations while allowing TASMAC liquor shops to function unabated.

The Hindu Munnani has announced that it would install one lakh idols at the residences and celebrate the Vinayaka Chaturthi festival. The Government has said that the festival has to be confined to the residences of the people. The organisation has also called upon the people to worship at Vinayakar temples and pray for good sense for the Tamil Nadu government to allow Vinayaka Chaturthi celebrations.

BJP state president K. Annamalai has also said that the party would conduct protests across the state against the DMK government’s decision to ban installing idols at waysides.

Hindu Munnani Tamil Nadu state president Kadeswara C. Subramaniam has said that the organisation would go ahead with the Vinayaka Chaturthi celebrations on September 10. He also demanded that the DMK government conduct talks with the Hindu Munnani leaders immediately.

While speaking to IANS, Kadeswara. C .Subramaniam said, “The DMK government of Tamil Nadu is showing its true colours and is against the Hindu interests. The Hindu Munnani is conducting a hunger protest against the draconian policies unleashed by the DMK government against Hindu festivals and we will strongly oppose this across Tamil Nadu.”

The BJP has also raised the issue in the Tamil Nadu Assembly with party legislator M.R. Gandhi calling upon the government to permit Vinayaka Chaturthi celebrations across the state.

However, state Minister of Hindu Religious and Charitable Endowments Department P.K. Sekar Babu in his reply said that the state government was only taking action on the basis of a circular issued by Union Home secretary Ajay Bhalla directing all states to take suitable measures to prevent crowd control and to avoid the spread of the Covid-19 pandemic.

DMK propaganda secretary, T. Sabapathy Mohan told IANS, “The BJP and Hindu Munnani are trying to politicise the issue. The government’s ban is only for the welfare of the people and to prevent the Covid pandemic spread and nothing else. People know the real issues and politically charged issues and they will see through the plans of these organisations.”