Grammy-winning singer-songwriter Taylor Swift treated her fans with a new version of her fifth studio album, 1989 (2014) ‘Wildest Dreams’. Taylor shared the re-recorded song’s link on her Instagram Story, writing, “Hi! Saw you guys got Wildest Dreams trending on tiktok, thought you should have my version.” on her social media. 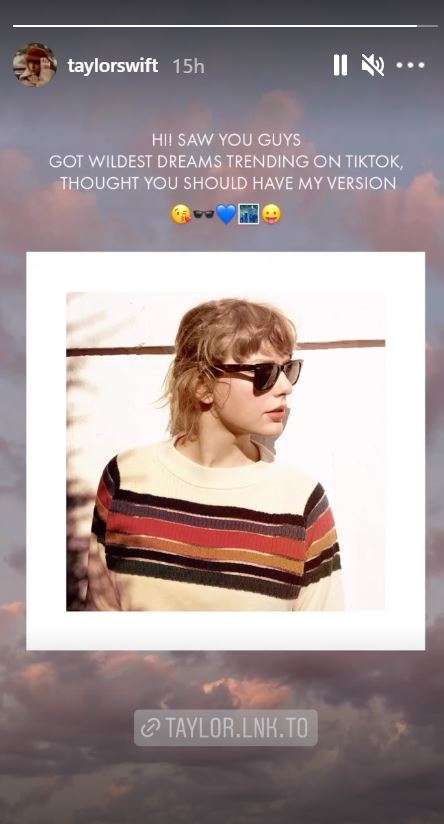 ‘Wildest Dreams’ has been rising in popularity on TikTok because of its association with a “slow zoom” filter on the service. The release of the single came as a surprise to fans — considering she’s expected to release her newest album, a re-recording of her 2012 album ‘Red’ on November 19 — and she instead released a re-recording from her 2014 album, ‘1989’.

Inspired by her fans getting the song trending on TikTok. Swift posted a clip to TikTok with the new version of ‘Wildest Dreams’, along with the caption, “Someone said slow zoom makes you look like the main character I said make it Taylor’s Version pls.”

Two hours later, she posted another video using the rerecording, with on-screen text reading, “You set a date in November with Red but then someone mentions 1989,” referencing her two different albums.

In its original version from seven years ago, ‘Wildest Dreams’ reached No. 5 on the Billboard Hot 100 and went to No. 1 on the Mainstream Top 40 and Adult Top 40 charts, reported People magazine. Swift is currently re-recording her first six albums after Scooter Braun bought her former record label Big machine, which gave him control of the masters. He later sold the masters for USD 300 million to Shamrock Holdings in November.

Bigg Boss 15 LIVE: Vishwasuntree asks junglewasis to give up 25l from prize money to enter main house or leave

Check out the bold and beautiful look of Bollywood actresses