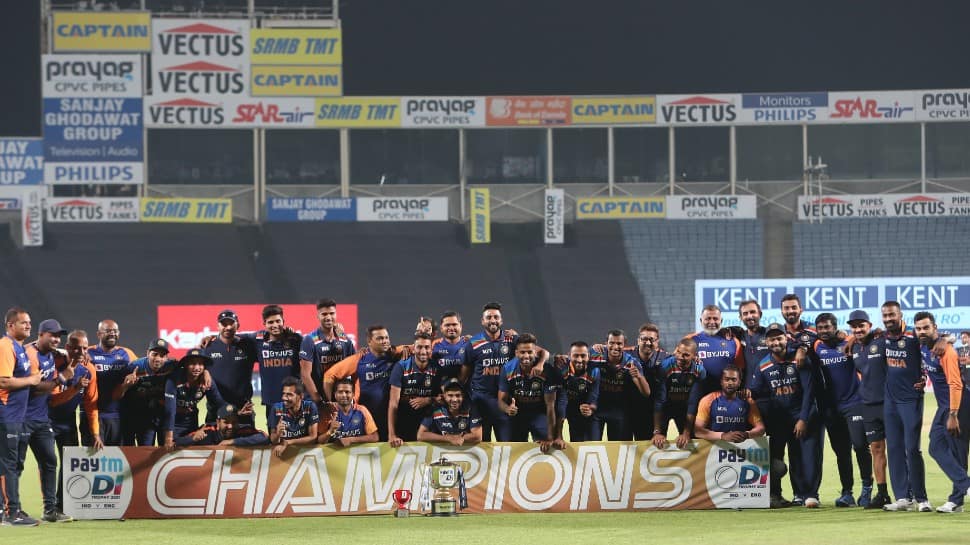 Team India head coach Ravi Shastri lauded Virat Kohli and co. on having ‘season of a lifetime’ as India’s international season came to an end on Sunday with an ODI series win against England.

Shastri’s remark came as the Men in Blue defeated England in the third ODI by seven runs to win the three-match series 2-1.

With this, India defeated England in all three formats this year. The side had won Test series 3-1, the T20I series 3-2, and then the ODI series 2-1.

Taking to Twitter, Shastri wrote: “Congratulations Guys for holding up and having a season of a lifetime in the toughest of times across all formats and hemispheres against 2 of the best teams in the world. Take a bow.”

Congratulations Guys for holding up and having a season of a lifetime in toughest of times across all formats and hemispheres against 2 of the best teams in the world. Take a bow #TeamIndia #INDvsENG pic.twitter.com/8UnGPZfMY4

In the third ODI against England in Pune at the Maharashtra Cricket Association Stadium in Pune, Sam Curran played an unbeaten knock of 95 but his innings went in vain as India registered a seven-run win in the third ODI to clinch the three-match series 2-1. At one stage, England was down and out at 200/7, but Curran changed the game around with his brilliant batting.

However, T Natarajan defended 14 runs in the final over, and the hosts clinched the series. For the hosts, Shardul took four wickets while Bhuvneshwar Kumar returned with three wickets. Earlier, India’s batting unit displayed a change of approach in the third ODI and this ensured that despite losing wickets at regular intervals, the hosts posted a total of 329. Rishabh Pant (78), Hardik Pandya (64), and Shikhar Dhawan (67) registered 50-plus scores as India set a 330-run target for the visitors.

Before the series against England, India had managed to defeat Australia 2-1 in the Border Gavaskar Trophy against all odds. The Indian side suffered a number of injuries and Virat Kohli returned home as he along with his wife Anushka Sharma were expecting the birth of their first child.

However, under Ajinkya Rahane, India registered a 2-1 series win against Australia. The Men in Blue also outclassed Australia in the three-match T20I series and the Indian side only suffered a loss in the ODI series.

F1: Max Verstappen leads practice at Imola ahead of qualifying

MS Dhoni’s 200th appearance for Chennai Super Kings turned into a grand affair as the ...