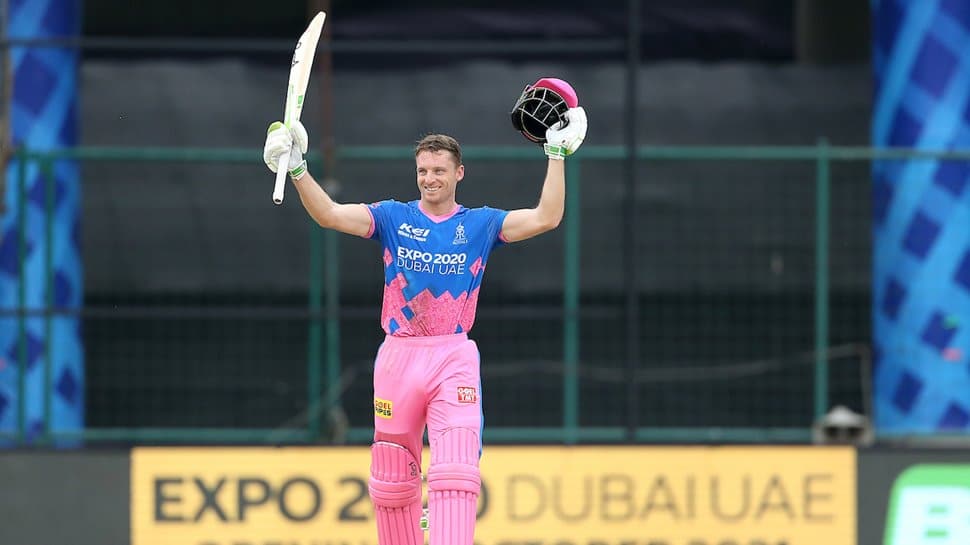 Jos Buttler completed his maiden ton in the Indian Premier League during the clash between Rajasthan Royals and Sunrisers Hyderabad at the Arun Jaitley Stadium on Sunday afternoon.

Buttler, who opened the innings with young Yashasvi Jaiswal after Rajasthan were put to bat by their opposition, went on to finish the innings on 124 from 64 deliveries. Buttler’s herculean effort saw Rajasthan impose a massive 220/3 on the board.

Not bad by Buttler who averages under 10 vs #SRH has x that by 10!! Amazing

Such was the Buttler’s carnage, that the English wicketkeeper-batsman combined with other Royals batters and accumulated 109 runs in the final seven overs of the innings.

During the course of his innings, Buttler went on become the leading run-scorer from the Royals camp in the history of the tournament.

124* – THIS IS THE HIGHEST SCORE BY A ROYALS BATTER IN @IPL HISTORY.

He also became the fourth England cricketer after Kevin Pietersen, Ben Stokes (2), Jonny Bairstow to notch a ton in the lucrative T20 league.

Buttler initially started off his innings on a slow note and managed to add just 33 in the first 35 deliveries he faced. However, after switching gears, Buttler went into an unstoppable mode and fired 89 runs in the other 29 balls of his innings.

For someone of slender frame, Buttler hits the ball long distances. Enjoyed a life early, but this has been a marvellous century

The right-handed batsman smashed a total of 11 fours and eight sixes and went on to stitch the second-highest third-wicket partnership with Samson, who scored a 33-ball 48 in the contest. The pair added 150 runs together.