Prabhas to feature in ‘Mission Impossible 7’ with Tom Cruise, claims THIS viral post. Is it for real?

Prabhas, ever since his blockbuster hit ‘Baahubali’ has become one of the much-loved celebrities of India. Every now and then, fans get excited to know about any new development in her professional life. Well, many of you would be surprised to know that the actor has been roped in by the makers of the Hollywood flick ‘Mission Impossible 7’ to play an important role. According to a post that went viral on social media, the actor met the director Christopher McQuarrie who read the script of the film after which he got excited and gave his nod for the project which also stars Tom Cruise. The post further claimed that all of this happened when Prabhas was in Italy for his upcoming project ‘Radhe Shyam.’ Not only this but it was even said that the actor is currently shooting for his portion and will soon return to India.

The viral post was shared by a person on Twitter with a username that goes @Mathest_SFC and goes as follows: “In a recent interview with Christopher McQuarrie the director of Mission Impossible 7, he confirmed that Indian actor Prabhas has roped in to play an important role in the film. He narrated the script to the Baahubali star while he was shooting for his upcoming film Radheshyam in Italy. Christopher met the actor and the actor gave his nod.”

The post further read, “Prabhas is one of the biggest stars in India. The Saaho star flew to Italy to shoot for the Mission Impossible series on Sunday. He will be completing his portions in the film and return back to India.” Read the full post here: 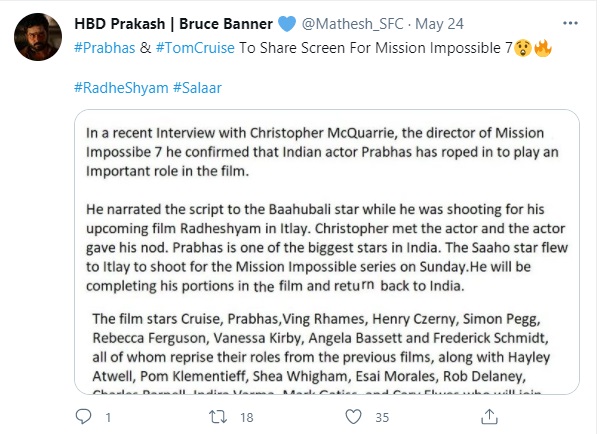 As soon as the post was shared, Prabhas fans went gaga and started showing their excitement on Twitter. Have a look at how they reacted:

Soon, there was a clarification made from the director’s end when he was tagged by many with the same news. He tweeted, “While he‘s a very talented man, we’ve never met. Welcome to the internet.”

For those unversed, the film Mission Impossible will also star actors like– Ving Rhames, Henry Czerny, Simon Pegg, Rebecca Ferguson, Vanessa Kirby, Angela Bassett and Frederick Schmidt. The action-flick is slated to release in the United States on May 27, 2022, and will also stream n Paramount+ in July 2022.

If the same comes out to be true, then Prabhas would join the list of Indian stars who have gone international like Irrfan Khan, Priyanka Chopra, Ali Fazal, Dhanush, etc.

Coming back to his forthcoming films, he currently has Salaar with Prashanth Neel, Adipurush with Om Raut, Radhe Shyam with Radha Krishna Kumar and #Prabhas21 with Nag Ashwin in the pipeline.