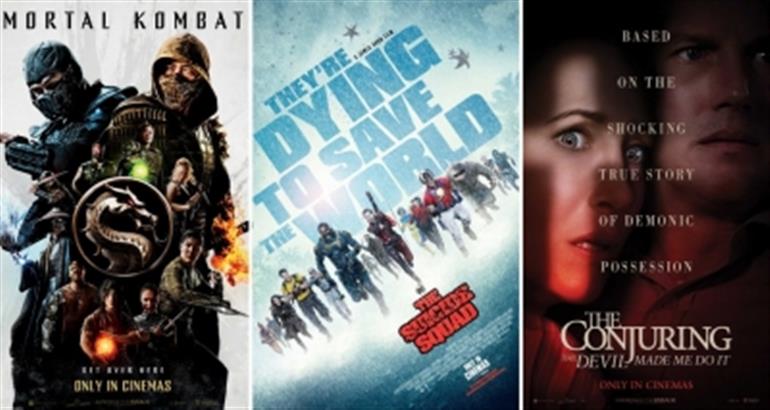 NEW DELHI: As states give the green signal to cinemas to reopen, multiplex operators say the three Hollywood blockbusters slated for release from July 30 will give the trade the much-needed oxygen that it had been denied in the last five quarters. Before the August 15 weekend, which is expected to see the release of Hindi films in the cans, these Hollywood releases are expected to get the audiences back.

The three movies are the martial arts fantasy film “Mortal Kombat” (re-releasing on July 30), “The Suicide Squad” (starring Margot Robbie, Idris Alba, John Cena, Sylvester Stallone and Viola Davis; August 5) and “The Conjuring: The Devil Made Me Do It” (August 13). Kamal Gianchandani, CEO, PVR Pictures said: “The release of these movies in three consecutive weeks in multiple languages and formats certainly will give a boost to the industry by inducing movie-goers to return to the big screens.”

Simon McQuoid’s “Mortal Kombat”, incidentally, was first released on April 23 in Kerala, Tamil Nadu, Andhra Pradesh and Telangana. Its July 30 re-release is pegged on the re-opening of cinema theatre in Delhi at 50 per cent capacity.

All eyes, though, are on James Gunn’s super-hero action movie “The Suicide Squad”, which is being released by Warner Bros on August 5. Also expected to draw crowds is the third installment of director Michael Chaves’s “The Conjuring” horror movie franchise. “The Conjuring: The Devil Made Me Do It” has been slated for an August 13 release. The film franchise, which has a cult following, follows a story of terror, murder and unknown evil that shocked even experienced real-life paranormal investigators Ed and Lorraine Warren.

Celebrating the news, Rajender Singh Jyala, Chief Programming Officer, INOX Leisure, said: “For the cinema exhibition industry, which has been facing severe headwinds for the last five quarters, there cannot be anything more important than brand new content which is also extremely high on entertainment quotient.” The releases, he added, would prove decisive in enabling the exhibition business to make a comeback.

The positive sentiment was shared by Devang Sampat, CEO, Cinepolis India, who assured movie-goers that all Covid-19 protocols would be maintained once the theatres re-open. He said this assurance of safety was important to get audiences back.

“It has proven to be successful in the overseas markets,” Sampat said. “At Cinepolis we have ensured that 100 per cent of our staff have been vaccinated fully.” Will such assurances be good enough for movie-goers to overcome their Covid fears? We’ll find that out soon.

Anupama Spoiler Alert: Anupama will know the intentions of Anuj Kapadia! will give this warning before starting work

Anuj Kapadia’s entry in the TV show ‘Anupama’ has given Anupama a chance to stand ...