Who is Anand Giri? From a Yoga guru to a saint to an accused – Anand Giri’s life has been a roller-coaster ride. Now in police custody for allegedly abetting the suicide of his mentor Mahant Narendra Giri, not many are surprised with what has happened to Anand Giri – once termed as a successor to his guru.

Mahant Narendra Giri had brought Anand from a Haridwar Ashram to Prayagraj’s Baghambari Mutt when he was 12 years old. Anand, now 38, hails from Bhilwara in Rajasthan.

He was formally inducted into the Shri Panchayati Akhara Niranjani, the ancient monastic order to which Narendra Giri belonged, in 2007.

Known as ‘Chhote Maharaj’ at the famous Bade Hanuman temple in Prayagraj before he had a dispute with his Mahant Narendra Giri over various issues, including property.

Over the period of time, he cultivated his own following through yoga.

Anand Giri claims to have formally studied Sanskrit, Ayurveda and Vedas and graduated from the Banaras Hindu University (BHU), Varanasi before completing his Ph.D in Yoga Tantra. 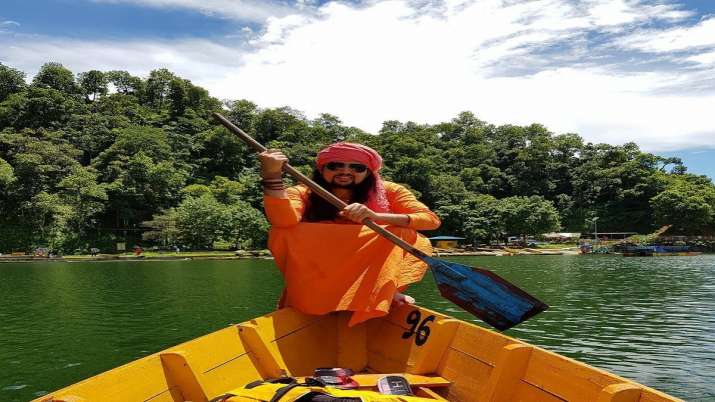 More than his spiritual qualifications, Anand Giri has been known for his escapades. His photographs in flashy luxury cars on foreign locations had flooded social media, bringing in severe criticism for his non-ascetic lifestyle.

Anand Giri also teaches Yoga as a guest lecturer in several universities in India and abroad.

During one of his travels, the controversy escalated when he was seen travelling business class with a glass of liquor next to him. He later dismissed it as apple juice.

Anand Giri was arrested by the Sydney police in May 2019 and produced before the Australian court in connection with the cases lodged against him by two women in 2016 and 2018 for inappropriate behaviour.

However, he was later acquitted by the court. Mahant Narendra Giri had supported his disciple at that time.

Anand Giri was also accused of continuing his relations with his family which is a serious violation of the rules of conduct for saints and seers.

He was also accused of indulging in financial irregularities associated with the temple fund, a fact that was confirmed at the time by secretary of the akhara Shri Mahant Swami Ravindra Puri.

Following this, Anand Giri was expelled from Baghambari Mutt and Niranjani Akhara as well.

Thereafter, he started accusing his mentor of selling Mutt’s properties and a few social media handles run by his supporters launched a campaign against Narendra Giri.

Later, some people managed to call for truce and Anand Giri formally sought forgiveness from Narendra Giri and the Panch Parmeshwar of the Shri Panchayati Akhara Niranjani.

Narendra Giri had then forgiven him and had also lifted the ban on Anand Giri from entering Bade Hanuman temple and the Baghambari Mutt that had been imposed on him at the time of expulsion.