Shweta Tiwari is one of the much-loved and appreciated Television celebrities who catches attention not just for her work but also for her personal life. These days she is seen performing dangerous stunts in Rohit Shetty‘s stunt-based reality show, Khatron Ke Khiladi 11. She was recently in Cape Town, South Africa in order to shoot for the same and left fans surprised with her stunning transformation. Yet again, she has grabbed the eyeballs because of her recent post on social media where she is seen all dressed up in a pink pantsuit. The same was clicked during one of her glam photoshoots and shows the ‘Kasautii Zindagii Kay’ star wearing a crop top with a plunging neckline.

The pictures which were shared on Instagram were captioned, “Suit.” As soon as the same was shared, it caught the attention of not just her fans but also her fellow contestants from KKK11 like Arjun Bijlani, Varun Sood, Sana Makbul apart from Sara Khan, Ridhima Pandit, Karanvir Bohra and TV producer Nivedita Basu. On one hand where KV commented, “Next level,” Arjun, on the other wrote, “Abs.” 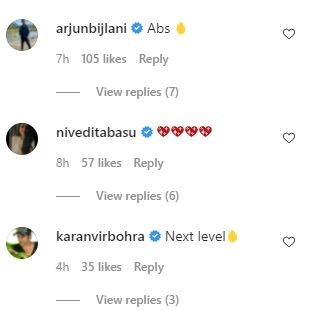 Just yesterday, her trainer shared a glimpse of her intense workout session with daughter Palak Tiwari in which the two of them can be seen exercising and motivating each other. Even the caption read, “LIKE MOTHER ~ LIKE DAUGHTER @shweta.tiwari & @palaktiwarii challenging & motivating each other.”

Meanwhile, check out some of her stunning pictures and videos here:

On the personal front, everyone knows about her infamous first marriage with Raja Chaudhary. Not only this but she is currently in a brawl with her present husband Abhinav Kohli who claimed that the actress has kept him away from their son Reyansh. Speaking about work, Shweta’s previous show on television was Mere Dad Ki Dulhan.

Shershaah Trailer launch: Kiara Advani expresses her gratitude to the Army and their families in Kargil