Bollywood actress Janhvi Kapoor treated her fans and followers with an adorable picture of herself with her dear friend Akshat Rajan as she wished him on his birthday. Along with the picture, she wrote, “Happy Birthday to the world’s best human, I love you @akshatranjan.” 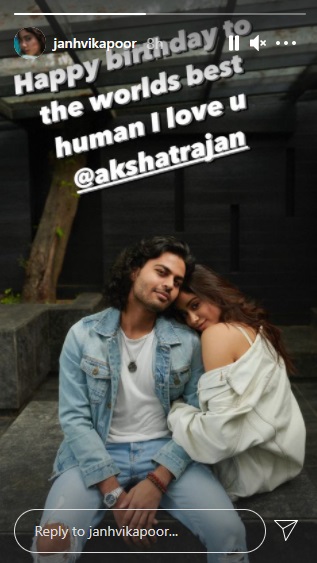 Meanwhile, the actress was rumoured to be dating Akshat when she marked her debut in Bollywood. Reports of them being in a relationship came into the limelight when on her birthday in March 6, 2018, Akshat had posted a beautiful picture of the dou. He had captioned the picture as “happy birthday” followed by a heart emoji. To which Janhvi had replied with an “ily” comment which is an abbreviation of ‘I Love You’.

However, in an interview, Janhvi revealed that the rumours of her dating him are absolutely false and that they both are childhood best friends. She had also said that he was scared to hang out with her because of the paparazzi.

For the unversed, Akshat Rajan is the son of business giant, Abhijit Rajan (Chairman and Managing Director of Gammon India Limited).

On the work front, the actress will be seen in the upcoming food show ‘Star vs Food Season 2’ where she tried her hand at cooking Korean food. The show releases on September 8 on discovery+. The actress is also gearing up for the release of her film “Dostana 2”. Besides this, the actress has finished the shoot for her film “Good Luck Jerry” earlier this year. The film is directed by Siddharth Sengupta.

Apart from this, she has also started filming for the remake of the Malayalam hit ‘Helen’ in August. Janhvi made her Bollywood debut three years ago with Dhadak. She shared the screen with Ishaan Khatter.