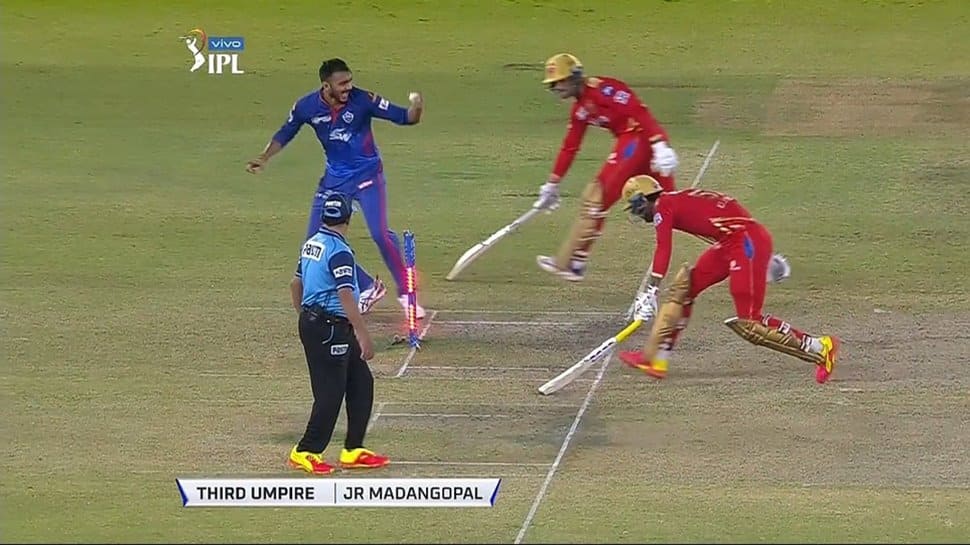 Punjab Kings must have breathed a sigh of relief, when the franchise found themselves in an awkward position during their Indian Premier League clash against Delhi Capitals at the Narendra Modi Stadium in Ahmedabad on Sunday.

Punjab, who were put to bat first by Rishabh Pant, were already struggling against a powerful bowling performance by Delhi and during the 14th over of their innings, the team endured another blow but in an unusual manner.

Deepak Hooda, who had just joined Mayank Agarwal in the middle, was caught in a mix-up with the latter and both the batsmen ended up running on their same end.

The incident took place in the third delivery of the 14th over bowled by Axar Patel, when Agarwal punched a ball and took straight off for a quick single. Hooda initially responded well to the call, but a sharp effort by Shimron Hetmyer on the field forced him to take a U-turn.

The ball was thrown towards Axar, who whipped the bails and threw the ball towards Pant to make sure that someone is out.

After much discussion Hooda was adjudged out as he returned to tha pavilion on 1.

At that moment Punjab were reeling at 88/4, with a little over six overs remaining in their innings.

However, Mayank, who is leading the side in the absence of KL Rahul, kept attacking but fell one run short from completing a well-deserved century.

Agarwal, who opened the innings with Prabhsimran Singh, finished the innings unbeaten on 99 from 58 balls, which included 8 fours, and 4 sixes.

Image Source : GETTY IMAGES Doull was one of the many New Zealanders who were ...