In Ayodhya, CM Yogi Adityanath said – Uttar Pradesh will soon be the state with the most medical colleges

Ayodhya: Chief Minister Yogi Adityanath reached Ayodhya on Sunday from Gorakhpur, amid speculation that he would be a candidate from Ramnagar Ayodhya in the 2022 assembly elections in Uttar Pradesh. Here he inspected the Rajarshi Dashrath Medical College and took stock of the development work. CM Yogi Adityanath said that Uttar Pradesh will soon be the state with the highest number of medical colleges in the country.

CM Yogi Adityanath said that there are no medical colleges in 16 districts. Medical colleges will be opened in these districts on the basis of Public-Private partnerships. He worshiped Ramlala and Bajrangbali. Along with this, visiting the cantonment of Mani Ramdas Ji to know the well-being of Mahant Nritya Gopal Das, President of Shri Ram Janmabhoomi Teerth Kshetra Trust. He went to Sugriva fort and met Peethadheeshwar Jagadguru Vishwesh Prapannacharya. During his five-hour stay in Ayodhya, he also left the security fleet and reached Sugriva Fort and also met Mahant Jagatguru Vishwesh Prapannacharya. 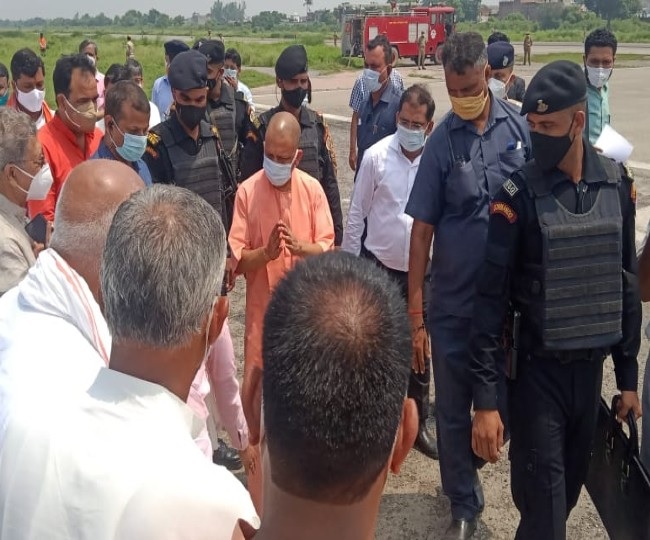 In a press conference organized in the Medical College, he said that when the first patient of the corona was found in the state last year, neither there was a system for investigation of corona nor Kovid Hospital in the state. The samples had to be sent to Pune for the test. Earlier the patient had to be sent to Delhi for treatment. Now there is a capacity to conduct three lakh tests daily and there are two lakh beds. Three thousand RTPCR tests can be done daily in the Medical College located in Darshannagar itself. Ayodhya will make a special place on the world map in the coming time. In such a situation, along with tourism, better arrangements are being made for health, education and drinking water, etc.

Talking to students and patients:  Chief Minister Yogi Adityanath interacted with four patients in the medical college. Along with asking his name and address, the CM also got to know whether the doctors come to see him regularly or not. Medicines are available or not. At the same time, he interacted with the students of MBBS in the academic campus of the Medical College located in Ganja.

UP Government Increase Sugarcane Price: The Yogi government of Uttar Pradesh will soon increase the sugarcane ...