This led to Pique mocking Casillas on his Instagram post after the former goalkeeper called the Barcelona defender a “mounguer” —  likely to be a play on the word ‘monguer’ – a derogatory term used to call someone an idiot — in response to Pique’s post wtih new hairdo that was captioned as “Younguer”or younger.

To this Pique responded with no qualms: “Isn’t that what Flo said about you in the audios?” 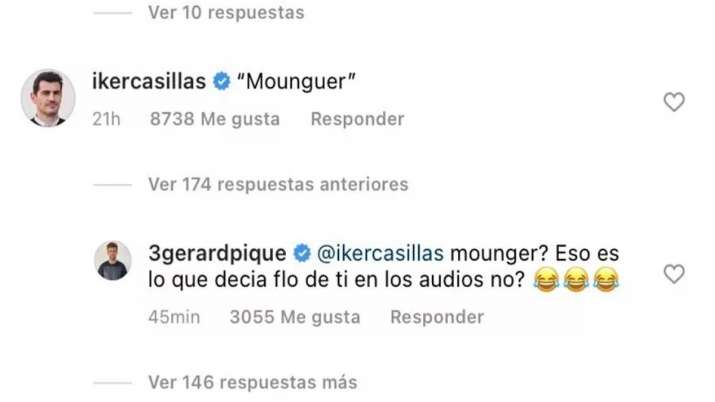 Earlier, in scathing revelation by the Spanish media, Perez was heard calling Casillas a goalkeeper who doesn’t deserve to be in Real Madrid in audio leaks that were few years old.

“Casillas is not a Real Madrid standard goalkeeper, what can I say? He’s not and never has been,” Perez allegedly said.

“He has been a big failure of ours. The problem is people adore him, love him, talk to him, they defend him so much,” he added.

“He is not good enough to be the goalkeeper for Real Madrid, what do you want me to say?. He is not. And he never has been.”

“You can tell when things aren’t going so well with his girlfriend as well; he’s absent (mentally). He’s like a child… he’s like a lapdog, a puppet, something childlike.”

Perez had no respite for Casillas’s journalist girlfriend Sara Carbonero.

“This girl, I don’t trust her one bit,” said Perez before adding, “This girl, these girls, you know what they’re after…they go crazy for fame,” Marca quoted from the leaked files.

He further added that Casillas has been a biggest mistake of the club and so is another club legend Raul, who was club’s highest goal scorer before Ronaldo surpassed him.

“People think I don’t like him, but the thing is I believe if he’d committed himself more he’d be the number one because, despite being a bit short, he has some exceptional qualities.

“But take the game against Barcelona with LaLiga at stake, the one we won 4-2… that Friday he arrived late to training… he’d had an argument with his girlfriend, ridiculous stuff.”

“It is the big mistake we made. What has happened is that (broken audio) they adore him, they want to speak with him. … I don’t know. They defend him so much. But, well, he is one of the big frauds of Madrid. The second is Raul. The two biggest frauds at Madrid are first Raul and then Casillas.

Perez went on to praise club’s former star player and manager Zinedine Zidane while criticising Raul further for taking the club down before his exit.

“(Zinedine) Zidane’s a great guy. And [David] Beckham and Ronaldo. … But then there are the others that think that … let’s see. Raul is a bad person.

“He thinks Madrid is his and he uses everything there is in Madrid, developing everything for his own benefit. Him and his agent. They are to blame for Madrid not doing well,” Perez was allegedly heard saying in the audio.

Reacting to the leaked audios, Perez soon made a statement through club’s official website saying his comments were taken out of context.

Real Madrid released a statement on behalf of Perez on Tuesday evening which read:

“Given the news broadcast in El Confidencial, in which phrases attributed to me are collected, I think it necessary to clarify: The reproduced phrases are pronounced in conversations clandestinely recorded by Mr. José Antonio Abellán, who has been trying to sell them for many years without success. It is surprising now that, despite the time that has elapsed, the newspaper El Confidencial collects them today . – They are single phrases of conversations taken from the broad context in which they occur,” Perez wrote.