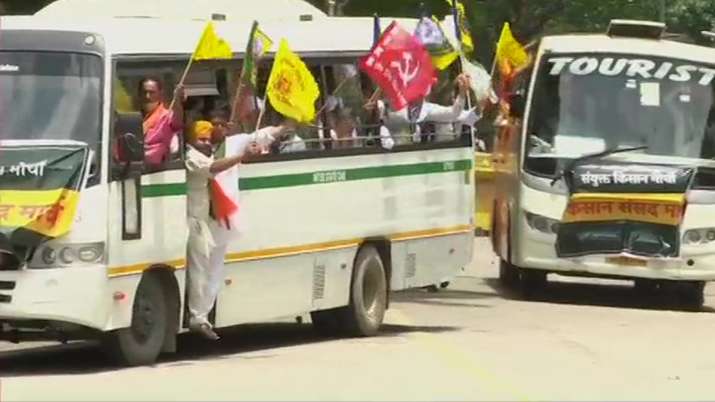 Security at Jantar Mantar in central Delhi has been tightened in view of a protest by farmers against the Centre’s agri laws on Thursday amid the Monsoon session of Parliament. Adequate security arrangements have been made and police and paramilitary personnel deployed. Jantar Mantar is a few metres away from the Parliament House where the Monsoon session is underway. A group of 200 farmers will travel to Jantar Mantar from their Singhu border demonstration site in buses with a police escort and hold protest there from 11 am to 5 pm. The Samyukt Kisan Morcha (SKM), an umbrella body of farmer unions which has been spearheading the protest against the three farm laws, has been asked to give an undertaking that all COVID-19 norms would be followed and the stir would be peaceful. This is the first time since the violence in the national capital during a tractor rally on January 26 that the authorities have granted permission to the protesting farmer unions to hold a demonstration in the city.

Farmers Protest LIVE: Country has witnessed that these farm laws are beneficial and are in favour of farmers. We have had discussions about these laws. If they express their issues with the laws point-wise, we can discuss it: Union Agriculture Minister Narendra Singh Tomar

Parliament LIVE: Punjab Congress MPs staged a protest in front of Gandhi Statue in the premises of Parliament, over three farm laws

Delhi Farmers Protes: We have placed preventive arrangements to avoid the entry of any miscreant at the Tikri border. The arrangement has been put in place as they (farmers) haven’t received permission to hold protest here: Parvinder Singh, DCP, Outer District

Farmers Protest LIVE: Parliament is just 150 metres away from Jantar Mantar. We will hold our own Parliament sessions there. What do we have to do with hooliganism? Are we miscreants?: BKU Leader Rakesh Tikait on being asked about arrangements to tackle situations like Jan 26 Red Fort violence

Farmers Protest Live: Farmers gather to board the buses at Singhu (Delhi-Haryana) border, ahead of protest against three farm laws at Jantar Mantar in Delhi

The security at Jantar Mantar road in Delhi has been beefed up by Delhi Police as scores of farmers are scheduled to hold a protest there against the three farm laws on Thursday. Delhi Special Commissioner of Police (Crime), Satish Golcha, and Joint Commissioner of Police, Jaspal Singh, visited Jantar Mantar to review security ahead of the farmers organisations gathering at the spot. However, Delhi police said, “It has not given written permission to the farmers so far to gather near Parliament.”

200 farmers to gather at Jantar Mantar daily: The farmers organisations leading the protests at the Singhu border have decided that 200 protesting farmers will assemble at Jantar Mantar every day from Thursday.

Kisan Parliament: Farmers said that they will hold Kisan Parliament from July 22 till the Monsoon Session of Parliament ends. One speaker and one deputy speaker will be chosen every day. In the first two days there will be discussion over the APMC Act. Later, the other bills will also be discussed every two days.

Farmers asked to follow Covid norms: Farmers have been advised to observe Covid-appropriate behaviour and social distancing. The farmer unions have also been advised not to take out any march in view of Covid restrictions. The Delhi Police has put in place extensive arrangements to ensure that the protest programme remains peaceful,.

Thousands of farmers from Punjab, Haryana and West UP across the country have been agitating at three Delhi border points — Singhu, Tikri and Ghazipur — against the three farm laws that they claim will do away with the minimum support price system, leaving them at the mercy of big corporations. Over 10 rounds of talks with the government, which has been projecting the laws at major agricultural reforms, have failed to break the deadlock between the two parties. A tractor parade in Delhi on January 26, that was to highlight the demands of farmer unions to repeal three agriculture laws, had dissolved into anarchy on the streets of the national capital as thousands of protesters broke through barriers, fought with the police, overturned vehicles and hoisted a religious flag from the ramparts of the iconic Red Fort.

Ahead of assembly polls in 5 states, Prashant Kishor close to firming ties with Congress