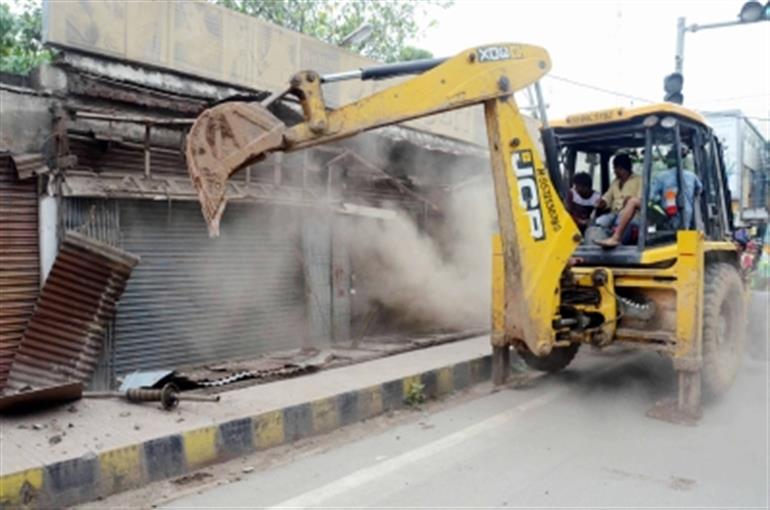 NEW DELHI:  To ensure smooth traffic flow in the national capital, the Delhi Transport Department is working on the removal of encroachment on the roads.

“There are teams of enforcement departments, 55 teams, which are working to address such issues on roads. We have updated a decentralised structure of Deputy Commissioners in three zones and one of their mandates is to ensure that there is no encroachment on the left side of the roads. This will be done with the help of the traffic police,” Principal Secretary and Transport Commissioner Ashish Kundra told IANS.

“We had a high-level meeting recently to make sure that the lane dedicated for the bus and other heavy goods vehicles is not encorached upon so that that section of the road could become usable for motorised transport. We are collaborating with the traffic police on this,” he added.

About one-third of the roads in the city are usually encroached by parked vehicles and street vendors, rendering a significant percentage useless for transports of all sizes, which are compelled to move in the same lane. This leads to traffic slowdown.

The Transport Department on Friday inked a Memorandum of Understanding (MoU) with the IIT-Delhi’s Foundation for Innovation and Technology Transfer to work jointly on the road safety projects and policies in Delhi.

Transport Minister Kailash Gahlot inaugurated the Delhi Road Safety 2021 Summit at the Taj Mahal Hotel, along with a six-month social media campaign to raise awareness on the same.

At the launch, the Minister shared the importance of timely scientific analysis of road accidents to ascertain their cause.

“With the help of the timely scientific analysis of a crash, we can pinpoint what factors have actually caused the accident. We are in touch with Delhi Police and we have requested them to inform us whenever an accident takes place so that members of the Road Safety Cell could examine the site before the evidences are removed. This will help us ascertain the reason behind the accident – the driver, design or any other factor,” Gahlot said.

“The Delhi government has taken numerous steps to make roads safer. The automated driving test tracks is a conscious step in the same direction. If we can produce sensitive and sensible drivers, we could reduce the number of road accidents, most of whose victims come from the economically weaker section of the society,” he added.

Parliament Winter Session to be held from November 29-December 23: Sources