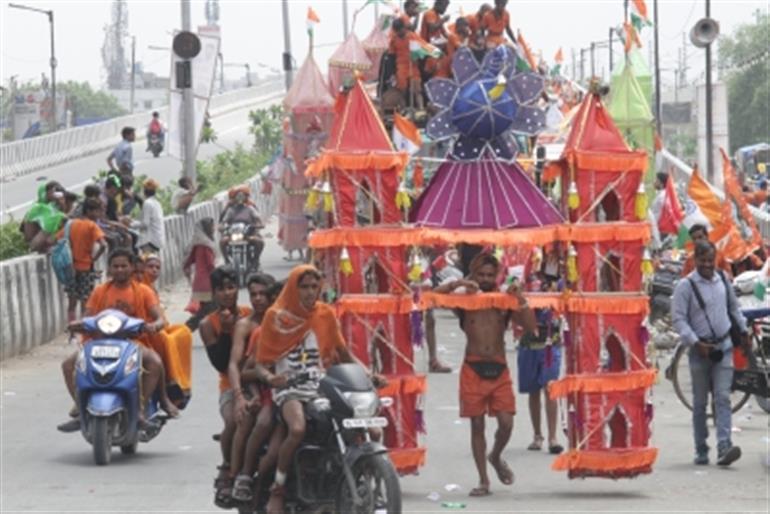 NEW DELHI: After several northern states, including Uttarakhand, announced restriction on ‘Kanwar Yatra, the Delhi administration too on Sunday prohibited any movement of Kanwariyas in the national capital to contain the spread of coronavirus.
The Delhi Disaster Management Authority (DDMA) in a notification on Sunday stated that Kanwar Yatra-2021 should not be permitted in order to prevent the spread of the Covid-19 virus in the National Capital Territory (NCT) of Delhi.

“The upcoming Kanwar Yatra will commence from 25.07.2021 and in spite of being banned/suspended by the Uttarakhand government, there is an apprehension of gatherings/congregations/processions during Kanwar Yatra-2021,” read an order issued by Delhi Chief Secretary Vijay Dev.

Delhi’s Covid management authority has also directed the government authorities including Delhi Police and district administrations to ensure strict compliance of the directions.

“District Magistrates (DMs) in Delhi, as well as their respective district deputy commissioners of police to ensure strict compliance of the order, and to further adequately sensitise the field functionaries about these instructions for strict compliance, in letter and spirit,” notification read.

The DDMA’s decision comes a day after the Uttar Pradesh government, too, cancelled the yatra, despite permitting it earlier. The UP government’s order came after the Supreme Court, on Friday, instructed it to reconsider its decision to allow the pilgrimage despite concerns over Covid-19, giving it time till Monday to do so.

Last week, the Supreme Court had warned that “it would cancel the Kanwar Yatra if Uttar Pradesh does not.”

On Tuesday, the Uttarakhand government announced it will not allow the movement of Kanwariyas this year. Rajasthan has also called off the annual pilgrimage.

The Kanwar Yatra, which was cancelled last year as well, sees thousands of Lord Shiva devotees, most of whom travel on foot and, more recently on trucks, to Haridwar in Uttarakhand to collect holy water from the Ganges river. The pilgrimage mostly begins in late July and goes on till the first week of August.

Various parts of India likely to get heavy rainfall on Monday