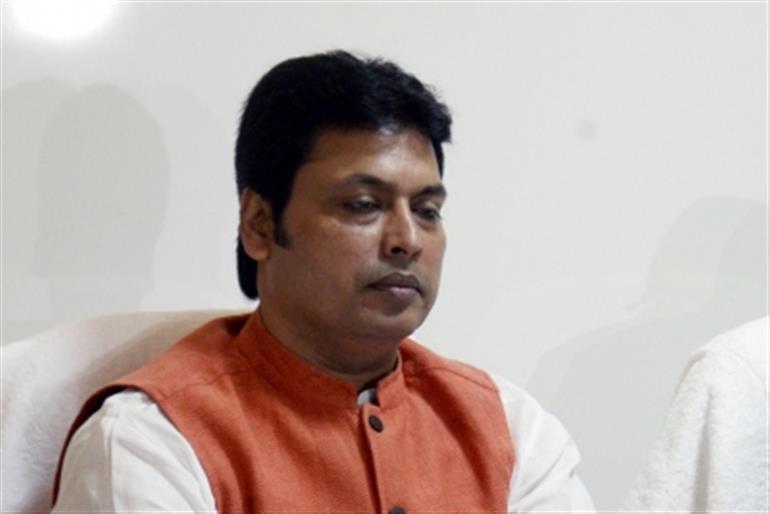 Agartala:The long-awaited expansion and reshuffle of the council of ministers of the BJP led alliance government in Tripura is likely to take place soon, top party sources said on Monday.

After meeting Nadda on Sunday night, Deb tweeted: “Informed him about the committed efforts being made by the State Govt for welfare of the people of Tripura and also held extensive deliberations on various organisational matters of the party.”

“Delighted to meet BJP General Secretary (org) Shri B. L. Santhosh ji and briefed him about the party work and pro-people initiatives taken by our government under the guidance of PM Shri Narendra Modi Ji. Also received valuable direction and support from him to strengthen the party,” said Deb in another tweet.

Deb, who went to Delhi along with the state party President Manik Saha on July 14, during his stay in the national capital also met Prime Minister Narendra Modi, Union Finance Minister Nirmala Sitharaman and four other central ministers and discussed various developmental and economic issues of Tripura.

A senior BJP leader told IANS that the Chief Minister would expand and reshuffle his council of ministry in line with the union cabinet reshuffle done by Prime Minister Narendra Modi.

Without elaborating about the possible expansion and reshuffle of the state council of ministry, the BJP leader said that the exercises both in the ministry and the organisation would be done keeping an eye on the next assembly elections, due in February 2023. “The central BJP leaders have given green signals for the cabinet expansion and reshuffle in the Deb-led BJP-IPFT ministry,” the leader said, refusing to be named.

Since the BJP-IPFT (Indigenous People’s Front of Tripura) government assumed office on March 9, 2018, three ministerial berth were lying vacant and in May 2019 former Health and Information Technology Minister Sudip Roy Barman was sacked following differences of opinion with the Chief Minister and the vacancy in the ministry rose to four.

Amid dissidence and discontent among a section of the legislators and leaders, the ruling BJP in the state along with the party’s central leaders, have initiated a series of meetings since last month to strengthen the organisation before the 2023 Tripura Assembly polls.

To quell the dissidence and differences, besides the State Executive meeting on June 28 two other very significant meetings were held in 12 days. On June 16, BJP’s National General Secretary (Organisation) B.L. Santhosh, General Secretary in-charge of the Northeast region Ajay Jamwal and central observer Fanindra Nath Sharma rushed to the state and held a series of meetings for two days with the state leaders, legislators, ministers and other party functionaries. Another central observer Vinod Sonkar was scheduled to come on June 16 but his tour was cancelled at the last minute.

A BJP insider said that at least ten of the party’s 36 MLAs did not participate in the June 25 crucial meeting of the legislators held in the state Assembly conference hall. Strong speculations about a fresh political development in Tripura are rife after BJP national Vice-President Mukul Roy along with his son Subhrangshu Roy rejoined the ruling Trinamool Congress on June 11 in Kolkata. Roy, before joining the BJP around four years ago, had often visited Tripura to supervise the Trinamool’s organisational matters. Under Roy’s influence, six Congress MLAs led by Sudip Roy Barman and a large number of party leaders and workers joined the Trinamool in 2016 and a year later joined the BJP, boosting the political strength of the saffron party.

All the six and former Congress legislature party leader Ratan Lal Nath were re-elected on the BJP tickets in the 2018 polls and among them Roy Barman, Pranajit Singha Roy and Nath were made Ministers and Biswabandhu Sen appointed as Deputy Speaker.

Roy Barman, son of former Chief Minister and incumbent Congress leader Samir Ranjan Barman, became the Health and Family Welfare, Information Technology and Science and Technology Minister, but was sacked on May 31, 2019 following the dispute with Deb. At Least 11 BJP legislators and some party leaders led by Roy Barman and fellow MLAs and former party Vice-President Ram Prasad Paul went to Delhi in October last year to discuss “party affairs in Tripura with the central leadership”.

Amid dissidence and discontent among a section of the BJP leaders and legislators, Chief Minister Deb in December last year announced to take “public mandate” through public gatherings in Agartala but subsequently with the request of the central and state leaders, the plan was called off.