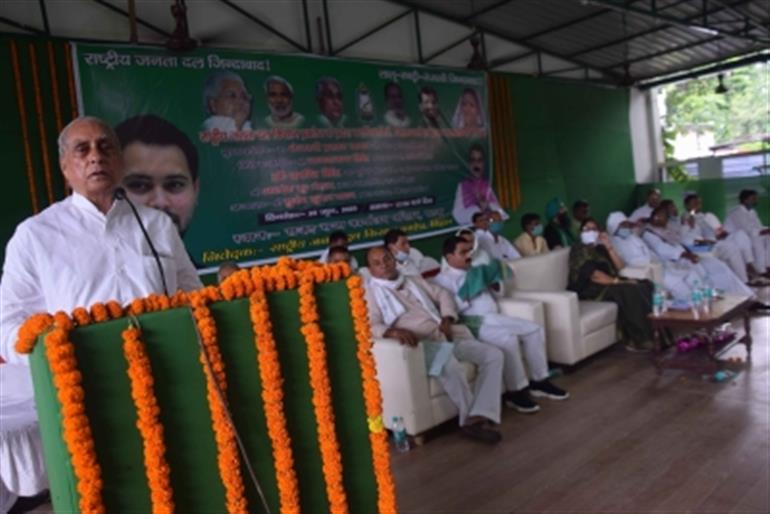 Singh, who had written a letter to Chief Minister Nitish Kumar in this regard a few days ago, said that as the state government did not reply, he was putting his letter in the public domain.

“JD-U is the third-biggest party in Bihar but its office is bigger than of the RJD and the BJP. Moreover, Bihar government has demolished 24 flats of legislators and allowed the JD-U to merge the land, apart from a service lane bisecting its office, of the sports field of Milar High School, located on Veerchand Patel Path, Patna,” he claimed.

“As a result, the JD-U office has developed good infrastructure including AC conference hall, meeting rooms, wash rooms apart from sitting areas for legislators and office employees,” he said.

“We are the largest party in Bihar but as our office is small, we are facing so many problems especially in the corona period. We have requested the CM to allot 13,797 square feet space, located adjoining our RJD office but the state government did not respond to it,” he said.

“I don’t know what he is talking about. The land was allotted to all recognised political parties, according to their choices in 2006. The allegation levelled against us is rubbish,” he said.

Bharat Bandh: OSRTC bus services to remain suspended from 6 AM to 3 PM

Ready to agitate for 10 years, but won’t allow farm laws to be implemented: Rakesh Tikait

BJP indulges in hooliganism, their motive is to sell this nation: Mamata Banerjee

Image Source : ANI BJP indulges in hooliganism, their motive is to sell this nation: ...