Big accident in Varanasi postponed: 10 patients evacuated due to short circuit fire in OT and corridor on third floor of Galaxy Hospital

A path was created to break out the glass of the ICU.

On Wednesday, OT fire broke out on the third floor of Galaxy Hospital in Mahmurganj. The flames spread out to the corridor. Fire brigade personnel and hospital staff, who arrived on the spot, shifted 10 people to the ICU and CCU of the safe side. No one is harmed. Smoke was taken out by breaking the mirror of OT’s parlor ICU.

Chief Fire Officer Animesh Singh said that the doctor’s chamber in the OT may have sparked from the short circuit. A fire could have occurred due to falling on the couch. The fire had reached the fall ceiling of the corridor beyond the OT. All have been removed and shifted to the ICU and other OTs nearby. 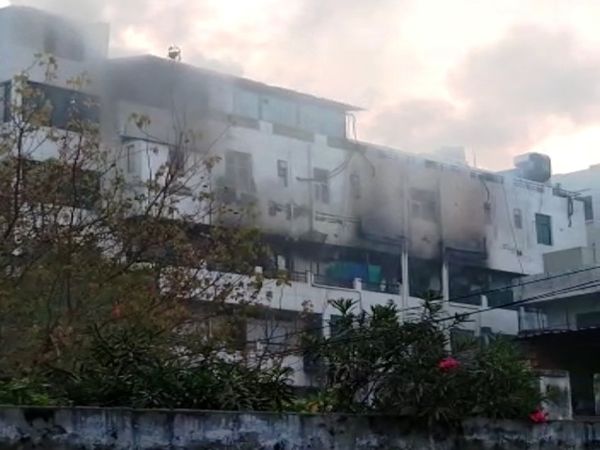 A spark from the short circuit fell on the couch, causing the fire.

There was a lot of smoke due to the fire. The fire fighting team and management people broke the glass of the ICU and made a way for the smoke to come out. Manduvadih police station in-charge Parashuram Tripathi also reached the spot along with the police team. How much was lost, the hospital has not yet given details. Investigations so far have found the fire system to be fine.

Uttar Pradesh: Kisan Mahapanchayat canceled in Lucknow, know what is the reason

Uttar Pradesh: Many villages affected by floods in Moradabad division of UP, farmers’ faces are disappointed due to destruction of crops.

UP Assembly Election: Important meeting of Congress on UP elections tomorrow, meeting will be held at Sonia Gandhi’s residence

Heavy rain occurred in Uttarakhand in the past and due to the rain, the effect ...